The nerves that were with me yesterday for AM’s arrival have changed to nerves of anticipation that she will experience even just a fraction of what I have experienced.

Our joint Camino began around 8:30 am with a breakfast shared with a couple of Irish girls and an English girl who were also starting their Camino. I gave them some tips which I had gleaned during my past three weeks from other peregrinos and from my own experiences. You do tend to sound like a bit of an expert when talking to newbies but really there are no experts on this adventure. I haven’t seen anyone who has all the answers to all occasions.

We picked up our rucksack for the day having sent the main bags on to our next destination and opened the door to one of the most beautiful sunrises I have seen since the beginning of my Camino. I did tell AM I had organised it just for her but not sure she fell for that one. It was a great sign of things to come. 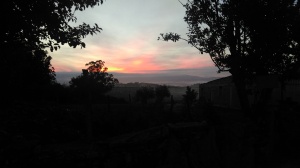 I had to introduce AM to Abdul in the tienda across the road so she could purchase walking poles. I had found these sticks invaluable even though they did take a little getting used to. When you are on unsafe, rocky or muddy slopes, either uphill or downhill, these can really make you feel a lot safer and can prevent ankle injuries due to slipping or tripping.

We took some obligatory photos of the start of AM’s Camino at the 108 km marker and we were away.

AM and I have a very similar pace when walking which is a great help. I have seen some couples with dramatically different paces who either tend to split up and have to wait for one another or try to change their paces which tends to tire you even quicker than normal.

The beautiful sunrise looked like a great omen for the journey even though AM’s induction on her very first day was a massive 28 km walk. We had discussed this and we were fairly sure we could manage this. We were splitting this into two parts. The first part would be a 13 km walk before stopping for a lunch break and then the remaining after lunch.

The morning walk was fantastic, we strode out sucking in all the beauty of the countryside and the fresh morning air. I picked apples from the trees, we took photos and we talked of my previous week’s walks. This was what I was looking forward to for so long. We were sharing the experience. I was really happy.

Along the way we stopped at a little café for a coffee and another stamp for our peregrino passports. You have to get a least two of these stamps a day from different places, three would be better. AM had got her first stamp in Sarria at the bus station café and her second at the little bar/café where I had met Peter from Dublin the day before. For today she had one from 108 to Santiago, one from Abdul in the tienda and now a third from this café. You can get as many as you like after the two compulsory ones.

This café was very popular, there was quite a crowd in the small shop and peregrinos were adjusting their footwear and stocking up with water and snacks.

I fought my way in and ordered two café con leches, coffee made with half water and half hot milk and a piece of tarta de almendra, my favourite almond cake.

We sat outside and had our coffee, AM got her passport stamped and we just chilled for a moment or two.

A couple of minutes went by and I could hear a muffled voice shouting something but couldn’t make out what was being said. We sat on chatting and then I heard the voice again. This time I heard it say, in a Spanish accent “Campbell Joseph, Campbell Joseph”. I asked AM had she heard someone calling my name and she said it was a guy standing at the front door of the shop calling “Campbell Joseph” and holding a wallet in the air. Ooops! I had left my wallet on the counter when I carried the coffees outside. I thanked the guy very much and he shared a smile with his friends at my kilt. I was heartened by the honesty of a fellow peregrino, wouldn’t have expected anything less really.

We finished our break and set off again.

The countryside was changing as we were heading west along the trail. The laneways and the pathways led through scenery which could have been from home. The atmosphere was definitely Irish, the colours came from the same palette, the people were my people.

As we came down from one of these lanes we came across a beautiful walled garden which hosted a little café and an albergue off to the side with a stunning view down a valley. We were stopping here for lunch. Empanada de atún for me – a kind of tuna pie and AM had a piece of Tortilla. I had the compulsory C&L, AM had a coffee.

We had taken our shoes off as it is a good idea to allow your feet to cool down as much as possible. I walked across the courtyard to the grassy field sloping down towards to valley. The ground was spongey beneath my feet and I curled my toes into the grass and enjoyed the coolness.

On again after about half an hour towards Portomarín, the next bigish town along the way. We weren’t stopping here though but heading on another 8 km to Gonzar.

The way into Portomarín was a major challenge for AM. A very high and long bridge with the walkway not particularly well closed in. She doesn’t really like heights so walked the complete length of the bridge with her hand over her eyes.

She made it to the other side and I could see the relief on her face. I had just walked in front of her and hadn’t realised she was having such a problem.

We didn’t go into Portomarín, we could skirt round the outside of it to continue on to Gonzar, which would save us a climb up the steep steps into the city.

The way out of Portomarín was exhausting. A steep climb at first then out onto a path beside the main road. Around 5 km of slow, hot exposed climb. At one point I think AM and I were ready to sit down and not get up again. It was very difficult, especially as AM’s first day and in the heat of the afternoon sun. It seemed never ending, tarmac hell that kept teasing you at each bend in the road.

Eventually we found Gonzar. One of the most welcoming albergues I think I had come across for a long time. It looked relatively new and had a marvellous bar area in the courtyard at the back. Three pints of C&L went down in quick succession. One almost instantly. Poor AM was suffering quite a bit but, after a drink and a sit down, we recovered enough to sit with some new peregrinos, have dinner and then sit talking to around 10:30 pm, laughing and exchanging stories and ailments.

These peregrinos we would meet again along the way and at the end of our journey.

Despite the agony of that last few kilometres to get here I think AM’s first day was spectacular and I hope she enjoyed the first chance to meet peregrinos in their natural habitat.

Setting out 1st September to walk El Camino. I am walking the French Way and starting at Logroño. My wonderful wife is joining me at Sarria to finish the walk with me.
View all posts by CJ →
This entry was posted in El Camino. Bookmark the permalink.

To share views of the Camino de Santiago with friends and family.

Ideas That Grow and Bloom

I want to keep a record from start to finish of my experience of El Camino. If anyone has advice, stories, warnings or suggestions I would appreciate all comments or replies.

I want to keep a record from start to finish of my experience of El Camino. If anyone has advice, stories, warnings or suggestions I would appreciate all comments or replies.

All the Pilgrim Routes to Santiago de Compostela